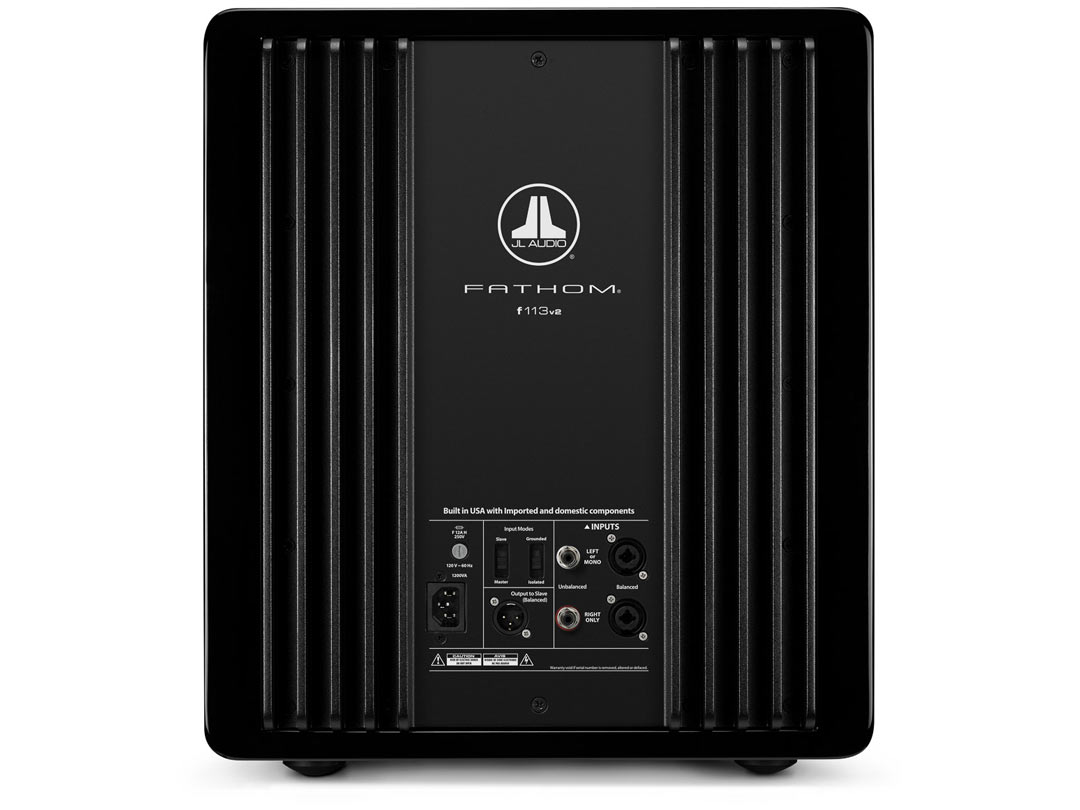 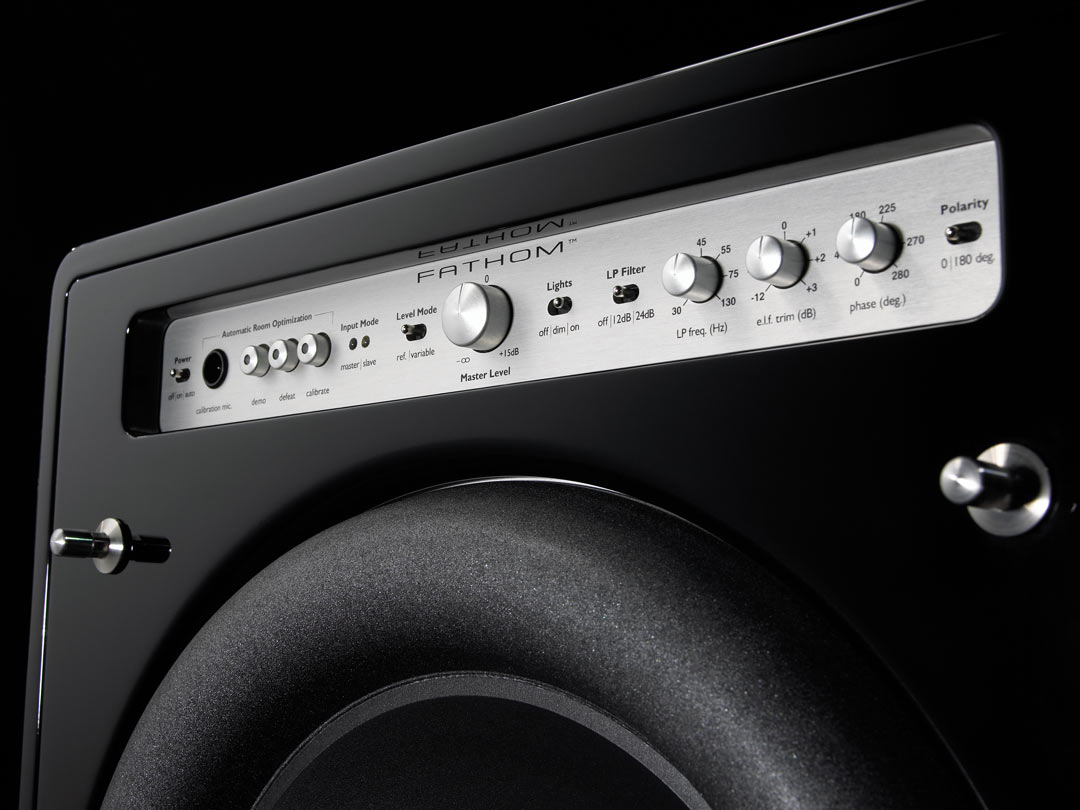 Simply put, Fathom® is the compact subwoofer system for those who enjoy demanding program material and won’t settle for compromises.

The challenges associated with designing high-output compact subwoofer systems can be quite daunting. In most cases, designers sacrifice low-frequency extension or output capability in order to keep the design small.

The Fathom® v2 subwoofers sacrifice nothing, thanks to the dynamic advantages of their proprietary JL Audio woofers. These exceptional drivers allow for a true subwoofer passband and very high output, while keeping distortion well below audible thresholds. To extract full benefit from the excursion envelope of its woofer, each Fathom® employs an exceptionally powerful switching amplifier with a large toroidal transformer and a patented circuit designed to enhance control and fidelity.

The compact design and conventional form factor of the Fathoms apply beautifully to most home theater applications, including built-in designs. Front-mounted controls make them a dream to set up and adjust, while JL Audio’s exclusive Digital Automatic Room Optimization circuit makes sure that response is smooth, even in challenging rooms.

JL Audio has made a name for itself around the world as one of the premiere automotive speaker companies, which technically means they do manufacturer more than justsubwoofers. However when it comes to the home theater and audiophile markets they’re all subwoofersall the time. Currently, JL Audio offers three different subwoofer series: Gotham, Fathom and Fathom IWS. Gotham sits atop the JL Audio family tree as the company’s flagship, followed by the Fathom series, which offers four unique models, followed by the Fathom IWS, which is the company’s in-wall subwoofer series with two product solutions. The subject of this review is JL Audio’s entry-level sub, theFathom f110 subwoofer, which retails for $2,100 in its satin black finish and $2,200 in high gloss black.

The f110 uses a single, 10-inch driver in a sealed enclosure powered by an internal amplifier capable of churning out up to 900 Watts of power in the short term. The f110 has a reported frequency response (Anechoic) of 27-111Hz. As for the f110’s dimensions it’s rather compact given its capabilities, measuring in at nearly 16 inches high (including feet) by 13 inches wide and 17 and a quarter inches deep. The f110 is built to last, evident by its knuckle bruising construction and 67 pound out-of-the-box weight. Truthfully, I haven’t encountered a subwoofer, in my home, that has been built to the same exacting standards as the f110, which is sad, for some of those subwoofers have cost more than the f110’s $2,100 starting price.

When it comes to integrating the f110 into your existing home theater or two-channel system JL offers two unbalanced inputs (stereo or mono) as well as two balanced inputs (stereo or mono). There is also a balanced output as well which is marked ‘slave,’ allowing you to daisy chain one or more f110s together. A detachable power cord rounds out the f110’s rear panel options; however above its 10-inch driver rests the f110’s control panel. The f110, like all JL Audio subwoofers, packs an unprecedented level of control when it comes to integrating it into your existing system and room – remember, like loudspeakers, subwoofers are also critical of room dimensions and setup. The f110 has level modes beginning with Reference (fixed gain) or Variable (full mute to +15dB over Reference). There are Low Pass Filtersranging from Off, 12dB per octave or 24dB per octave. Low Pass Filter Cutoff is variable from 30 to 130Hz, with Phase also variable from 0-270 degrees and ELF trim variable from -12dB to +3dB at 28Hz. Polarity can be switched between 0 or 180 degrees as well. There are also controls for the display lightsas well as power modes, which include Off, On or Automatic Signal-Sensing. But that’s just the f110’s manual controls, for the f110 also features JL Audio’s Automatic Room Optimization (A.R.O.) program, which comes with an included, laboratory-grade, calibrated microphone.

The A.R.O. is an automatic equalizer that analyzes your room’s curve at the primary listening position, then tailors the f110’s sound for the flattest possible response using cut-only equalization. The process is straightforward and simple: first, plug in the included microphone and place it at ear height at your primary listening position, then press the small button marked “calibrate” on the f110’s control panel. After about three minutes the A.R.O. process, which is nothing more than a series of low frequency tones and sweeps, is complete and you’re ready to enjoy. Of course, the A.R.O. equalizer is not a cure-all for bad subwoofer integration and placement. That you’ll still have to do your due diligence with, but it is a handy tool for fine-tuning the f110’s ultimate performance.

Okay, okay, enough with the technical mumbo-jumbo – does the f110 rock or does it rollover? I assure you the f110 can rock and then some. I was sent two f110s for this review, which I mated to my reference Bowers & Wilkins 800 Diamond loudspeakers by placing each f110 along the outside edge of the 800’s aluminum plinth, making sure the f110’s driver was in line with the 800’s drivers. This put the f110sroughly three feet off my back wall and two feet off my side walls. I also went ahead and placed eachf110 atop one of Auralex’s SubDude HD isolation platforms to combat unnecessary vibrations – in my home, not in the f110 itself. My processor, the Integra DHC 80.2 has stereo subwoofer outputs so I went ahead and ran the f110s as a stereo pair versus slaving one off the other. From there I went ahead and integrated the f110 into my existing system through my processor versus the f110’s control panel and then ran the f110’s A.R.O. The entire process from unpacking to listening took about an hour and was easy enough for a single person to accomplish.

The f110’s sonic capabilities are staggering and far exceeded my expectations, especially given their compact size and 10-inch driver pedigree. Two-channel music took on new dimension and palpability with the f110s in my system. Movie soundtracks, especially bass tracks, be they a film’s score or sound effects, were absolutely epic. I was stunned at the sheer amount of air the f110s were capable of moving yet still remain focused and refined. At one point my pants legs were flapping from the f110s output from a distance of 10 feet. The most impressive part of the f110s performance was their ability to seamlessly integrate into my system and disappear from my room, for I couldn’t discern where my 800 Diamonds stopped and the f110s began nor could I locate their presence in my room even when I visually fixated on their location. Even when I disconnected one of the f110s I was still treated to a wonderful low-end performance that was taut, detailed and above all musical, though having two f110s in my system was nothing short of perfection. For my money and needs I’m not sure it gets better than the f110s, though if you had a larger room (and didn’t live in a house built in the 1940’s) I could see the allure of some of JL Audio’s larger designs, especially their flagship Gotham g213.

Like I said earlier, there are more than a few subwoofers out there to choose from though few, especially at a little over $2,000, can compete with the f110. A few notable competitors include Velodyne’s DD+ 10 subwoofer at $3,299 as well as Paradigm Studio SUB 15 at $2,799. Both are very capable subwoofers and offer similar feature sets to the f110, but are also clearly more expensive.

It’s rare that I come across a product that I can’t find something not to like about, but that is where I find myself with regards to JL Audio’s Fathom f110 subwoofer. I suppose I don’t like the f110’s grill but that’s akin to criticizing a supermodel for being an inch too tall or to short – it’s silly. While some will probably feel spending $2,000 on a subwoofer is nothing short of insanity, others will no doubt see it as a bargain. I’m inclined to side with the latter for it’s the subwoofer I would choose for any reference two-channel or home theater system regardless of price. Recommended? Hell yes.