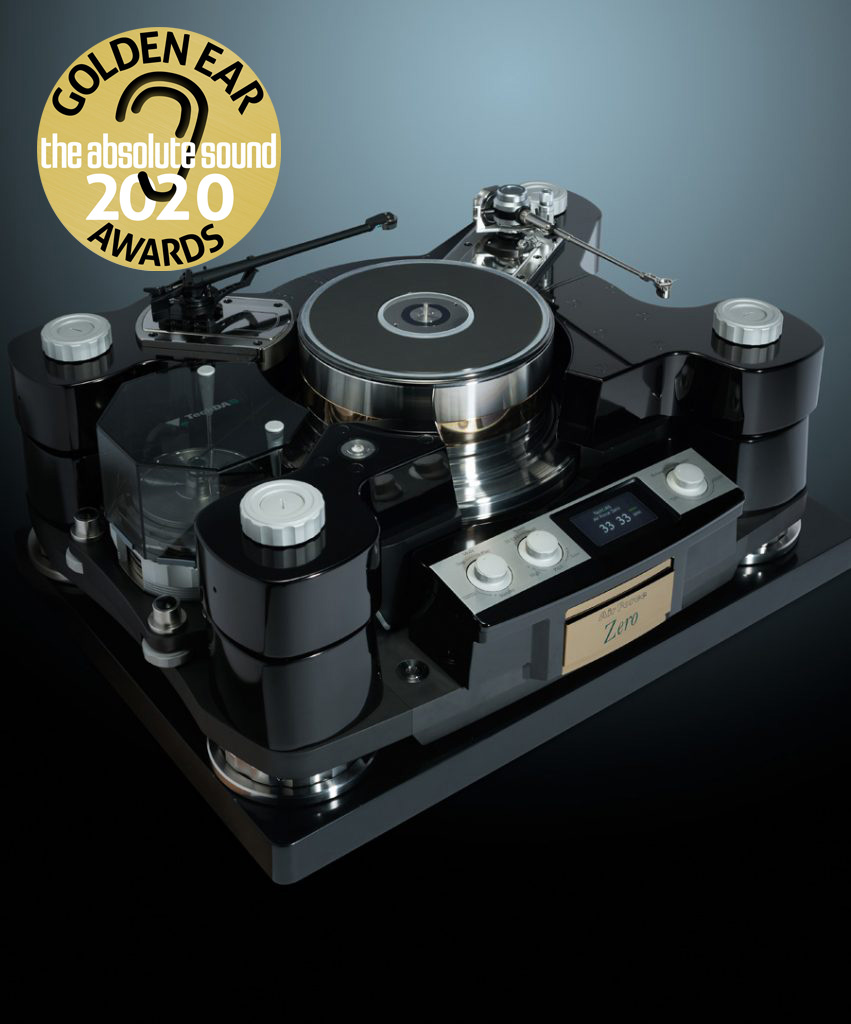 TechDAS Air Force Zero Turntable
$450,000
The Air Force Zero, a 700+-pound beast devoted to spinning a vinyl platter as unobtrusively as possible, is an immensely impressive creation, a tribute to the ingenuity and seriousness of purpose of its legendary designer, Hideaki Nishikawa. The massive air-bearing platter, composed of multiple layers of stainless steel, gun metal, and tungsten, makes the LP itself look positively diminutive. But the sound that this gorgeous belt-drive ‘table produces is something altogether different. It can ramp up to dynamic fortissimos that will shake a room, whether the music is a Mahler symphony or a Led Zeppelin tune. But perhaps the most impressive aspect of the Zero is its refinement. There is a sense of ease to the proceedings, a blissfulness that transports it into a truly lofty realm that perhaps no other competitor can quite match. The mechanical lengths that TechDAS has gone to, including a three-phase Papst motor, are daunting. No fewer than three external units are required to drive the Zero. Different tonearms and cartridges will always affect the sonic presentation, but the fundamental image solidity and purity of sound are a constant. The depth and width of the soundstage are titanic and bass authority absolute. When coupled with a custom-built HRS VXR stand, the Zero delivers the analog goods, and then some.

Our Path to the TechDAS
Air Force Zero

In recent years we have seen hundreds of analog turntables released, and this has been a major trend in the audio industry. What does this phenomenon mean?

“One of the major reasons is a backlash from the excessive transition from analog to digital audio. Around this time of transition to digital, there was already a serious demand for high quality analog decks from some discerning audiophiles. It was clear to us something was missing in the digital domain that audiophiles were desperately seeking.

With this growing trend in the market, in 2008 we started research and development of authentic analog turntables. Striving toward a goal of developing a turntable delivering the highest performance of the present day, and in a practical sized chassis, we finally launched our first analog turntable, the Air Force One in 2012. This product proved to be hugely successful, a turning point in analogue reproduction, and spread out to far more users across the world than we first imagined. Since then we have continued development and launched an extensive line of turntables to meet more demands in the market. Currently we have a full product range from the Air Force One Premium, Air Force Two Premium, Air Force III Premium to the Air Force V.

In parallel to the development and releases of these models, a project was going on at TechDAS to bring our dream of the absolute ultimate reference turntable to reality. The goal of the project was to develop a truly groundbreaking product, building on our expertise and knowledge and incorporating new ideas and insights. To achieve this goal, the project had to be cost-no-object. And it had to have whatever technologies would be best suited for sonic performance, no matter how much it would cost. We are pleased to announce it is finally complete, though it took one year longer than initially planned. The result is a turntable weighing 330 kg and measuring 902 (W) X 677 (D) X 335 (H) mm.”

Installation of the first TechDAS Air Force Zero turntable in the US.

The Premiere of the Air Force Zero Turntable

Unlike the Air Force One, which TechDAS developed with a few conditions to meet, they set no limitations in designing the Zero. However, at the beginning of this project, TechDAS had a few guidelines they used in the design process:

Most exceptionally, the main system weighs 330 kg. It is actually much more than TechDAS initially expected. This is an absolutely colossal system.

The first task was to find a motor to drive this gigantic system. By pursuing every avenue, TechDAS finally found some high quality synchronous motors manufactured for tape recorders by the renowned German manufacturer, Papst. These motors proved to be most suitable for the company’s aim, which opened the door to the success of the Air Force Zero project.

The next step was to review and modify the Papst motors so that they could work optimally for the world’s best turntable system. Building on the 3-phase, 12-pole synchronous AC large torque motor, TechDAS developed a customized air bearing and flywheel technologies which they used in driving the motor.

The major features of the Air Force Zero Motor are:

During a steady state rotation, the driving amplifiers perform smooth rotation without the servo. The servo will be engaged only during the startup process or if the speed is changed by an external force. These technologies results in an exceptional level of rotational precision for a belt-drive turntable.

By using a specific rotation speed for the motor stored in advance, the DDS sets a corresponding frequency value and the motor performs a high torque rotation at this stage. The microprocessor computes the difference between the rotating speed detected by the sensor and the target speed.It then transmits a speed control signal to the DDS, which in turn controls the rotation to achieve the target speed.

The indication of “LOCK” blinks on the display during this process. Once an accurate rotation of the platter is reached, “LOCK” displays permanently on the display. At the same time, the microprocessor sends a command to apply low torque and deactivate the DDS while monitoring the rotation. This is because not much extra force beyond inertia is required for a steady rotation. If the rotation speed is changed for any reason, “LOCK” will blink on the display and the microprocessor will use the DDS to correct the speed. Once the accurate speed is achieved, “LOCK” will display permanently on the display and the rotation is kept in a stead state without the need to control the speed.

The Platter Base sits on a 100 kg Base Frame made of SUS stainless steel. This Base Frame, which has an enhanced speed of oscillatory convergence with special surface treatment, supports the total weight of 230kg of the Platters, Air Suspension System and Platter Base.

Two titanium tonearm bases are provided. Almost any 9 inch, 10 inch or 12 inch tonearms can be fitted with the exception of non-standard lengths.

The Platters are designed for the highest level of vibration absorption by combining different alloys. For example, the top layer is made of titanium with surface hardening treatment applied to produce hardness equivalent to hard metal alloy. More importantly, these five layers of platters are held as one with air suction similar to vacuum LP hold-down. This solution allows to us to avoid metal fittings which could induce mechanical stress..

The five platters float to the height of 10µm and rotate in absolute silence as one unit. To make this possible, the Platter Base surface is precision machined with a tolerance of less than Sµm at its circumference.

The AF Zero has an Air Suspension System consisting of four blocks providing insulation and absorbing low frequency vibrations at the four corners. This air suspension module is uniquely developed by TechDAS and air is supplied from an electric pump to the air suspension modules.

This Air Force Zero Rack system is exclusively developed and manufactured to deliver the best sound quality and performance of the Air Force Zero. It is made by Artesania Audio, a Spain-based high end rack company renowned across the world.

The system consists of two racks: