They said it couldn’t be done. Or maybe they just meant that it shouldn’t be done in a prevailing climate of global financial meltdown. In either case, anyone even remotely familiar with the workings of the mind of Gryphon founder and CEO Flemming E. Rasmussen knows that this is exactly the kind of challenge on which he thrives.

While other High End manufacturers are quietly closing up shop or reluctantly downsizing their ambitions in concession to an increasingly gadgetised and commodified audio market, Gryphon Audio Designs boldly and proudly offers the world the most advanced and, yes, most costly amplification components in the brand’s history.

The Pandora preamplifier and Mephisto stereo power amplifier bravely bucked current trends of austerity and restraint, opening up new dimensions in home entertainment for the serious music lover. Designed and built for the select few who can appreciate and afford this level of uncompromising musicality, the Pandora/Mephisto system announced to the world in no uncertain terms that Gryphon continues to stand by the commitment to ultimate fidelity in home audio that is the foundation of the company’s worldwide reputation. 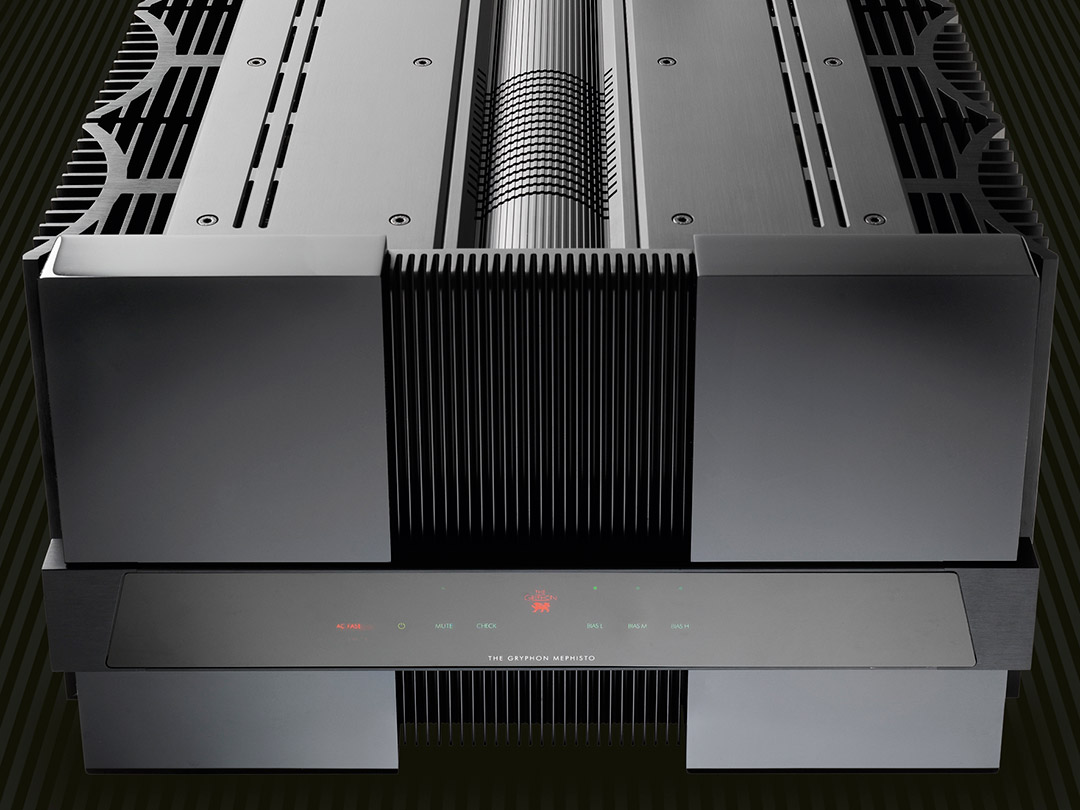 Of course, being Gryphon aficionados and, therefore, by definition, connoisseurs of the finer things in life, Gryphon owners immediately began speculating about what the next step might be for Rasmussen and his adventurous band of engineers and audiophiles. Nothing exceeds like excess, as an old saying goes.

Now, for the most demanding among the fortunate few who make up the Gryphon audience, for that limited circle able and willing to travel with us all the way on our journey, Gryphon presents the Gryphon Mephisto Solo single-channel power amplifier.

While monoblock construction is not unheard of in the High End, most often manufacturers take the easy way out, by simply creating a bridged version of an existing two-channel product. Bridging couples the stereo channels in series to form a single amplifier with increased voltage and, nominally, more output power. Unfortunately, the inevitable side effects of this approach include doubling distortion, doubling the input impedance (impairing the amplifier’s ability to drive low-impedance loudspeaker loads) and cutting damping factor in half (reducing the amplifier’s control of cone motion at low frequencies).

The Gryphon Mephisto Solo elegantly eliminates these issues by running two stereo channels in parallel (not in series) for unchanged output and voltage, but double the current and half the distortion. As always, extreme high current capability is a fundamental parameter in Gryphon amplifier design.

Capable of massive current swings, Gryphon Mephisto Solo maintains the dynamic integrity of the audio signal even under the most extreme reactive loudspeaker load conditions. The extraordinary load tolerance of the Mephisto Solo means that it will bring out the best in any loudspeaker.

Isolating power amplifier channels in completely independent enclosures offers additional crucial advantages. With separate power supplies, rectifiers, regulation, preamp stages and gain stages, there is no interaction whatsoever between channels. What happens in one channel at any given time (for instance, extreme instantaneous dynamic demands) is entirely independent of and therefore unaffected by anything going on in the other channel.

The quality of sound reproduced by Gryphon Mephisto Solo is completely level-independent. It is a huge amplifier capable of delivering its best at any volume setting, from background levels to full throttle.

Because the advanced Mephisto Solo protection circuitry is kept outside the signal path, full protection is achieved at no sacrifice in sound quality.

Like its inspiration, the Gryphon Mephisto two-channel amplifier, Gryphon Mephisto Solo is a unique design concept, destined to find a place only in the care of the most obsessively demanding music lover.

A Peek Beneath the Hood

Gryphon Mephisto Solo is designed with zero global negative feedback in order to meet the dynamic demands of the very best analogue and digital source components. Exceptional bandwidth – beyond 350 MHz – is achieved despite the total elimination of feedback.

A fully symmetrical, regulated low noise voltage supply has been used for all voltage amplification sections. For each monoblock, eight 56,000 microFarad capacitors with low ESR (Equivalent Series Resistance) and a total capacity of 448,000 microFarad/100V smoothes the voltage to the output supply.

By eliminating output relays, Gryphon Mephisto Solo achieves an extraordinary low output impedance. But most importantly, because output relays that can handle huge constant currents tend to have poor low to moderate signal transfer characteristics, the best relay is quite simply no relay at all.

As always with Gryphon, what is left out is just as critical as what goes in.

Call us at (703) 532-7239, e-mail us at [email protected], or use the form below. We are committed to a no-pressure environment and to providing the very best in customer service before and after you make your choice. We look forward to seeing you!