Nearly a decade ago, the Gryphon Diablo brought newfound credibility and respectability to the humble integrated amplifier. Previously the object of widespread scorn from audiophiles, the full potential of the integrated amplifier was finally realized in the Gryphon Diablo, so far ahead of its time that it—with typical Gryphon longevity—remained the absolute reference in its class for a full decade.

Gryphon Diablo is quite possibly the most popular high-end integrated amplifier of all time. Despite sales of thousands of units, its virtual absence from the second-hand market is a reliable indicator of the extreme loyalty of Diablo owners. 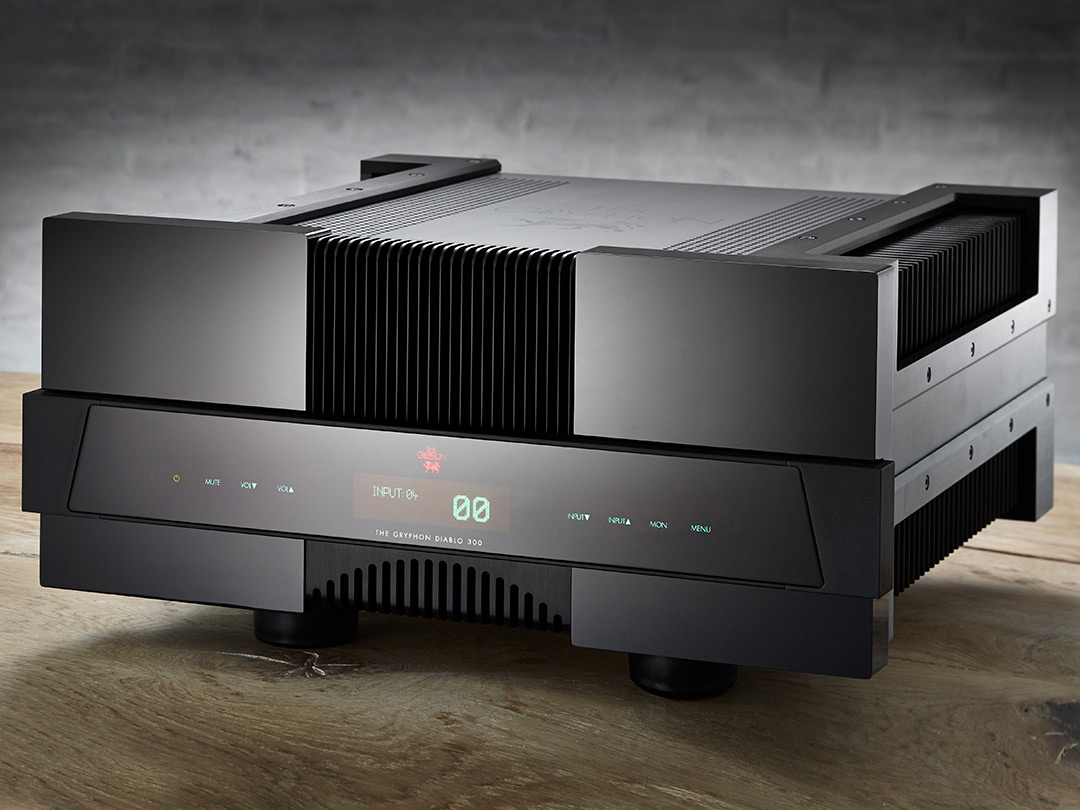 In updating the Diablo, the Gryphon engineering team faced a considerable challenge. In addition to Product of the Year awards including Lyd & Bilde (Norway), 6 Moons.com (USA) and Haute Fidelité (France), many of the most critical professional listeners have been inspired to effusive praise, as in this evocative turn of phrase from Hi Fi Choice (UK): ”Sounds like God’s own stereo.”

And there are many more:

“Ultimately, Gryphon’s Diablo is a contradiction in terms, because the sound it makes is truly Angelic.” – Australian Hi Fi

“The phenomenal level of resolution, detail retrieval, ambience recreation and dynamics this amplifier is capable of.” – 6mooms.com

The original Diablo also found its way into the pages of the mainstream press, where the Sydney Morning Herald (Australia) praised its “exceptional sound quality, even when driving speakers other amplifiers have found difficult to handle.”

Fortunately, in designing the Diablo 300, the Gryphon crew had the luxury and privilege of being able to draw heavily on concepts, components and technological breakthroughs that emerged during the evolution of the much lauded Gryphon Pandora preamplifier and Mephisto power amplifier.

The ultra-transparent, fully-balanced volume attenuator topology fully exploits the two balanced inputs. Unlike the vast majority of solid state volume controls that typically introduce dozens of resistors in the signal path, the Diablo 300 employs no more than two for any given level setting.

The extreme wide-band frequency response of the Diablo 300 extends from 0.5 Hz to 350 kHz and its prodigious 300 Watt (8 Ohms) power output capability represents a significant increase over the original Diablo. The extreme high current capability of the Diablo 300 allows it to double its output to 600 Watts in a 4 Ohm load and deliver a massive 950 Watts into 2 Ohms.

As these numbers confirm, the Gryphon Diablo 300 will remain rock solid when confronted with even the most viciously reactive loudspeaker loads.

Because it operates without negative feedback, the Gryphon Diablo 300 avoids both the intrinsic time-delay caused by sending the output signal to the input for a comparator loop and the resulting intermodulation distortion between time-offset signals.

To dissipate heat generated by the increased power of the Diablo 300, the unit is fitted with twice as much heatsink area as its predecessor. The highly efficient recessed heatsink array is cleverly integrated into the smooth exterior for a stylish statement that takes the Diablo 300 architecture well beyond the realm of undistinguished laboratory styling common to so many high-end audio components.

At the time of original purchase, or as the need arises at a later date, Gryphon Diablo 300 can be fitted with a specially-designed Gryphon DAC PCM/DSD module based on the innovative, award-winning Gryphon Kalliope digital-to- analogue converter. The module adds 5 digital inputs (USB, balanced AES 115 Ω, optical and dual S/PDIF 75 Ω). USB can process PCM up to 32-bit/384 kHz as well as DSD (Windows OS up to DSD512, Mac OS up to DSD128, Linux OS up to DSD128 DoP). The remaining digital connections can handle PCM up to 24-bit/192 kHz.

This future-proof digital module is ready for any current or foreseeable high resolution digital format.

And, in the finest Gryphon tradition, the Diablo 300 offers the option of an exceptional MM/MC phono stage for the dedicated enthusiasts who continue to enjoy the musical treasures etched into the grooves of the long-playing, black vinyl disc.

Style and Ease of Use

Despite its substantial size and heft, the satin black, brushed aluminum chassis and gleaming black acrylic faceplate of the Gryphon Diablo 300 exude luxurious elegance that will enhance any interior. Form and function come together as the non-magnetic, non-resonant chassis and isolated power supplies for pre and power stages and control and display functions shield against interference.

The Gryphon Diablo 300 is controlled via an intuitively simple touch-sensitive front panel user interface and a software-based menu display that allow the owner to customize key functions. Future software updates can be installed via flash memory as they are developed.

A large alphanumeric vacuum fluorescent display prominently exhibits the name of the active input and the current volume setting. Personalized input source names up to eight characters long can be assigned in the display.

All functions are accessible from the front panel or the striking remote wand. So there are no mechanical parts to wear out or become noisy.

“The remote is one of the very best I have tried, a long, slim metal design that enables you to get where you want to be quickly and completely intuitively. It is an object lesson in uncluttered clarity and it makes the amplifier a joy to control.” 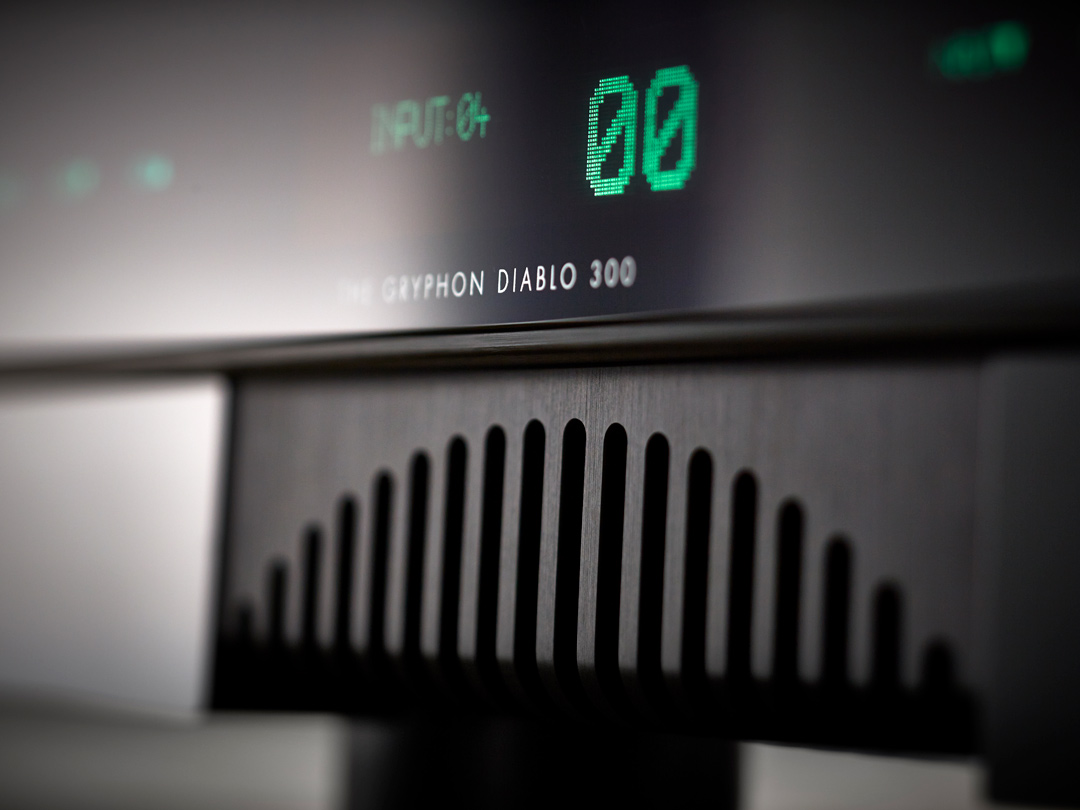 Diablo 300 incorporates a full-range subwoofer output and, for use in a surround setup without compromising the stereo performance of the Diablo 300, an AV throughput allows the Diablo 300 to drive the two main channels without the need to rewire or recalibrate the system when switching between stereo and surround operation.

Diablo 300 can be configured for automatic level matching of inputs to protect the owner’s ears and equipment when switching between sources with varying output levels. The volume control is linked to the Mute control to prevent increasing volume while the muting circuit is active. This eliminates the risk of loudspeaker damage through accidental overpowering.

For further protection, a fixed start level and fixed maximum level can be selected in the Diablo 300 setup menu.

An intelligent, non-invasive protection system constantly monitors operational status and, in the unlikely event of any problem, shuts down quickly and safely to protect your investment.

The Diablo 300 Mission
Vast reserves of pure, stable power ensure speed, precision, authority, effortless rendering of dynamic contrasts and a spellbindingly natural experience of the emotional ebb and flow of any style of music.

Like few audio components, Gryphon Diablo 300 keeps musical strands and layers distinct, yet cohesive, as it brings timeless art and artistry to your home.

“…the Gryphon Diablo 300 is unequivocally, and by a wide margin, the best integrated amplifier ever to grace our audio testing and music listening environment.”
full review

Call us at (703) 532-7239, e-mail us at [email protected], or use the form below. We are committed to a no-pressure environment and to providing the very best in customer service before and after you make your choice. We look forward to seeing you!